Keep the Preshow; Ditch the Queue

Keep the Preshow; Ditch the Queue

Ah, the dreaded queue. Most people cite queues as the least favorite part of visiting a theme park. This is why “virtual queues” like Disney’s FastPass have been so innovative, in lowering the perceived waiting time for attractions simply because you’re not in an actual line for part of that wait, free to enjoy the rest of the park’s offerings.

After Disney’s FastPass debuted in 1999, a major paradigm shift of theme park design in the last twenty years was creating overall circulation to accommodate more people in the pathways than usual — the logical effect of having less people in lines is that there are more people out and about in the park (which makes the merchandise and food & beverage people very happy — less time in lines means more spending money). 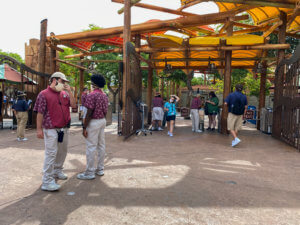 In fact, the future of a “queueless park” has always been a bit of a theme park design holy grail — more theory than an actual possibility, as the truth of the matter, is that queues themselves are a very beneficial part of a good theme park experience.

First, they are extremely efficient; in the worst case of an unthemed rectangular switchback queue, you can still fit a ton of people in a small footprint. Even highly thematic, story-driven environments like the incredibly long and very detailed queue of Disney’s Flight of Passage at Animal Kingdom uses clever and efficient architectural and structural design to hold tens of thousands of people off the park’s main walking paths — because most of that queue is designed to sit on top of the neighboring Na’vi River Journey show building.

Second, there’s the biggest benefit: through carefully crafted preshows, queues are great at establishing tone, mood and story for an attraction far in advance of actually riding it. Attractions benefit from the captive audience a queue can create, allowing guests to settle into an attraction’s story and gradually learn more about their role in it. At Thinkwell’s Animayhem attraction at Warner Bros. World Abu Dhabi, the highly detailed queue was a rare opportunity to dig deep into the history of the ACME corporation — with much of that story created specifically for the park, and now considered Looney Tunes canon — to prepare riders for their role as delivery drivers.

Like many other immersive queues, that attraction leverages the actual linear progression of being in a queue to slowly, deliberately deliver story moments through media, scenery, effects and cast member interactions to set the stage for the ride. Just look at Disney’s incredible Rise of the Resistance attraction for proof that a queue isn’t just an unwanted speed-bump before the main attraction — it’s designed to be a key part of the attraction itself, a part that no one wants to miss.

So what happens in a post-COVID world, when theme park designers start eliminating (or at least wholly shortening) the use of densely-packed queue lines? While it’s unlikely that this will lead to a 100% “queueless” park anytime soon, perhaps we can start imagining a different kind of future — one that acknowledges that guests want a “less densely populated queue” to feel comfortable, while combining mobile technology and line-reservation systems into a new form of storytelling that fills the role of an attraction queue.

First, Disney’s interactive game attractions already have guests circulating throughout a park — Sorcerer’s of the Magic Kingdom, Adventureland’s Trading Company and Pirate’s Adventure, Star Wars Galaxy’s Edge Datapad, etc. — all of these are, in essence, digital “crowd controllers” within the small throughput of their own game mechanics, moving groups around from story point to story point, with the back-end system managing crowd flow and dispersion.

Second, immersive theater techniques at shows like Sleep No More manage to keep hundreds of people moving through a large, non-linear physical space, along paths of invisible, self-guided linearity that allow guests to experience their own story. Knott’s Berry Farm has found huge success with these techniques as an attraction in and of itself, with their Ghost Town Alive activation.

What if you combined the best of both of these things — using the entire park as your “queue”, and nodes of experience & interaction as your timed pulse points? That way you still get a  preshow to an attraction, but it’s not confined within a queue.

Guests could reserve an attraction time, but rather than show up at the entrance for the attraction, their mobile device would send them on a point-to-point story adventure throughout the park, each node engaging them in a story point through embedded media, effects, or even cast member interactions. This could be a 30-60 minute experience that, in essence, becomes an attraction queue, ending up at the attraction in a carefully managed flow of people with less need to queue up in droves.

The efficiencies of queues are hard to ignore, and the overall capacities of a large-scale roaming interactive experience like this probably wouldn’t compete with that efficiency — but in a post-COVID world, there will be plenty of opportunities to innovate the part of a theme park visit that people enjoy the least — waiting in line.

The “Algorithm.” As a colloquial term for the recommendation engines...

Follow a forest light trail and discover illuminated moments from the...